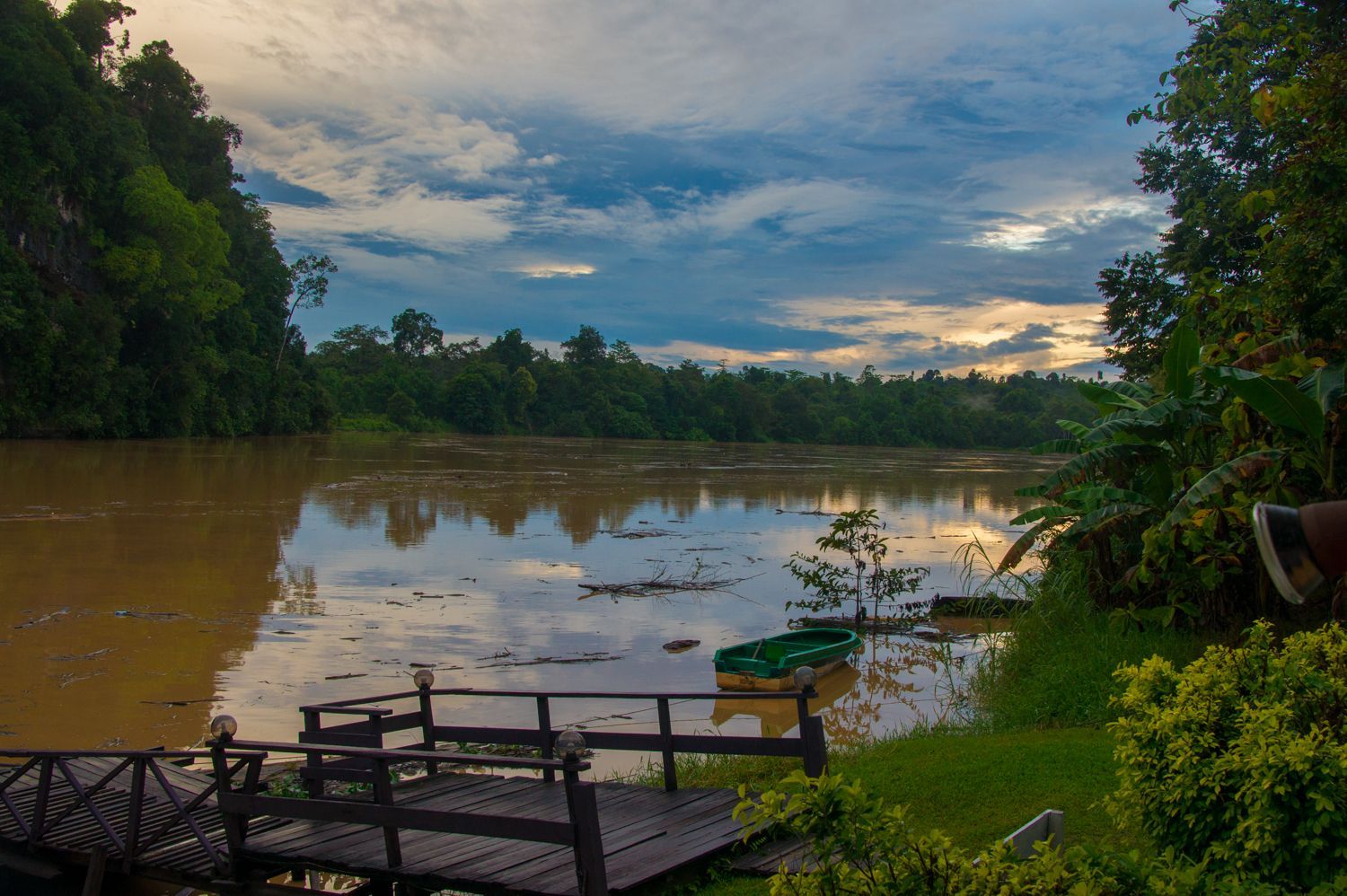 Having spent 3 days in Kota Kinabalu (KK), Bike and Tours and Chlöisu boarded the flight from KK to Sandakan. We were greeted by the friendly staff at one of the classy oriental concept hotel at the heart of Sandakan. The rooms were newly furbished and it offers its guests a spectacular view of Sandakan town and its coastlines from the rooftop café and bar. This was where Chlöisu spent the rest of his day in Sandakan after soaking in a bit of culture by visiting historical places like the Agnes Keith House and Central Market. He requested for his own personal time to read while chilling at the rooftop café and sipped ice cold coffee. Exposing himself to the ray of sunshine till it sets right before his eyes……

The next day Bike and Tours took Chlöisu to the Crystal Quest Jetty to cruise up the Kinabatangan River to Sukau. The Kinabatangan River is the second longest river in Malaysia after the Rajang River in Sarawak. This renowned river is not only known for its oxbow lakes and mangrove salty swamps but also the wildlife that resides in the lush green tropical rainforests along the river and the aqua creatures that calls this river their paradise.

As the boat meandered along the windy and long river, the guide’s “hawk eyes” was quick to spot the wildlife that seemed “hidden” to most of us on the boat. As soon as he spots a wildlife species he would signal the boat navigator to slow down or to move towards a certain direction. As the boat steered its way, the guide will share with us what he saw and what we would eventually see right before our eyes. During this cruise we were lucky to spot the colorful kingfishers, the adorable baby orang utan that hung tightly on to its mother as she swings like a “Jungle Jane” from one tree to the other, the long nose or “glamorously” known as proboscis monkeys and the cheeky long tailed monkeys. Those were a few of the on land residence that we witnessed for ourselves. But this was not the end of it.....

What lies beneath the murky “teh tarik (milk tea)” colored river? One would wonder. Surely there are other habitats there too. We managed to see a few fishes jumping out of the water and splashing its tail like a mini mermaid at the surface before returning to its comfort zone of the Kinabatangan River. Being the curious Chlöisu, he asked the guide if he had seen any crocodiles here. Quite casually the guide answered, “Yes plenty of time and now you too will witness one, right over there” he pointed towards the river bank for Chlöisu to see it for himself. And there it was, the green beast was peacefully taking its beauty sleep on that sunny afternoon. The boat headed closer to where the crocodile was located, everyone on the boat turned and focused their attention and lenses to our “new cold blooded celebrity”. Ourboat was close enough to take good snapshots but far enough to speed off if the green beast feels that we were intruding its privacy. Clicks and clicks away, the beast must have been woken up by a terrible nightmare! With its eyes wide open, it glared at us on the boat. We held on to our breath and within just seconds, the green beast lifted its heavy weight and quickly moved from the river bank and headed towards the river making a huge splash sound. Almost like a sumo wrestler that went for a dive! It was too fast that Chlöisu did not even manage to turn the dial of his camera from picture to movie mode! “Ohh what a waste!” he said with much regret for not being quick enough to capture this moment. By this time our boat has made its speed away from the green beast.

With the wind blowing on our face, cooling all of us on that hot sunny day, the close to 3 hours boat ride from Sandakan to Sukau ended with a warm welcome from the staff at one of the lodges that was situated right at the riverbank. The nice thing about small, simple lodges is that you get the personal touch from almost all the staff. The Chef even came out to the dining hall and served us some local delights like banana fritters, curry puffs and even small packed nasi lemak. This was our late afternoon heavy snacks!

A little surprise Bike and Tours prepared for a cycling enthusiast like Chlöisu. You see, he did not expect to cycle until he reached Lahad Datu. However, we managed to liaise with our good friend Fazree better known as Botak from Lahad Datu. Botak was kind enough to drive from Lahad Datu to Sukau to supply Chlöisu with a mountain bike. So when we arrived, Botak was already there with the bike and greeted Chlöisu with a friendly “Gutten Tag!” Being the busy person that he is, Botak had to rush back for some other appointments and promised to meet Chlöisu again in Lahad Datu. Chlöisu did not wait a second longer and quickly hopped on the saddle and hit the pedals to discover the village the eco-friendly style. With the camera in his pocket and helmet to protect his head, he cycled happily, stopping to take pictures of the local kids playing with mud, the monkeys on the trees and some pigs at village nearby. As he returned with a huge smile on his face, he began to narrate to us his discoveries, amazed to have spotted the wildlife quiet easily there.

Later on in the evening we were due for a night river cruise to watch the nocturnal creatures along the Kinabatangan River. However, Joe our guide decided to cancel the tour for that night due to safety reasons. It had rained earlier during the day and for that reason the water has risen and there were lots of logs that sadly floated down the river. “This is far too dangerous. I am so sorry. I will not take you there even if you pay me one million ringgit” Joe told the other persistent tourist. Such integrity of this local guide is so valuable and admirable. A value that we appreciated. Not everything is about commercial benefit.

The next morning around 6am all of us woke up for our morning river cruise, to catch the sunrise and activities along the river bank. Just as we were getting ready to board the boat Joe called for our attention, almost in a silent whisper, the mimic of Charlie Chaplin and pointed towards the electric cables. We saw a burgundy colored monkey looking towards us as he balanced himself on the cable. According to Joe, this was a red leaf monkey. A rare species and hard to find and that we were lucky to have a glimpse of this monkey. As we were busy snapping photos, Chlöisu who likes to find a seat with great view, skilfully worked his way like a leopard and found himself at the front row of the boat! Our new friends from Switzerland, the lovely Franziska and her partner Cedric who has been traveling Malaysia for close to 3 weeks then, were also amused by the sleek moves of Chlöisu!

And so off we went along the Kinabatangan River, in the wee hours of the morning. The atmosphere was misty and just about foggy. It’s almost like a scene from X-files. The weather was rather chilly with the crisp cool breeze blowing on our faces as we went against the direction of the wind. Kingfishers, hornbills, the great egrets and herons were some of the bird species that we managed to see that morning. Basically almost all the birds’ species were morning risers and were already busy with their daily activities. The nose monkeys were nowhere to be seen. Only after an hour of cruising did we manage to see some monkeys by the river banks. Joe made a stop at the oxbow lake just for us to enjoy the peaceful atmosphere. It was so silent that you could hear the wildlife such as birds, insects and laughing monkeys so loud and clear. Joe mentioned that the famous crocodile hunter – the late Steve Erwin was once there to visit this spot and managed to discover some crocodile species here. Without us realizing it, our 2 hours river cruise was almost over.

The grand finale of the cruise was the sight of a huge monitor lizard camouflaged at the bulk of a tree. Ohh, what a way to end our lovely morning cruise in Sukau. It was worth waking up early to the natural beauty of the Kinabatangan River.

Stay tuned as in the next episode we will share with you Chlöisu’s cycling journey from Sukau to Kampung Batu Puteh!

Kinabatangan River; Curious Chlöisu Did It Again! (Episode 4) Next