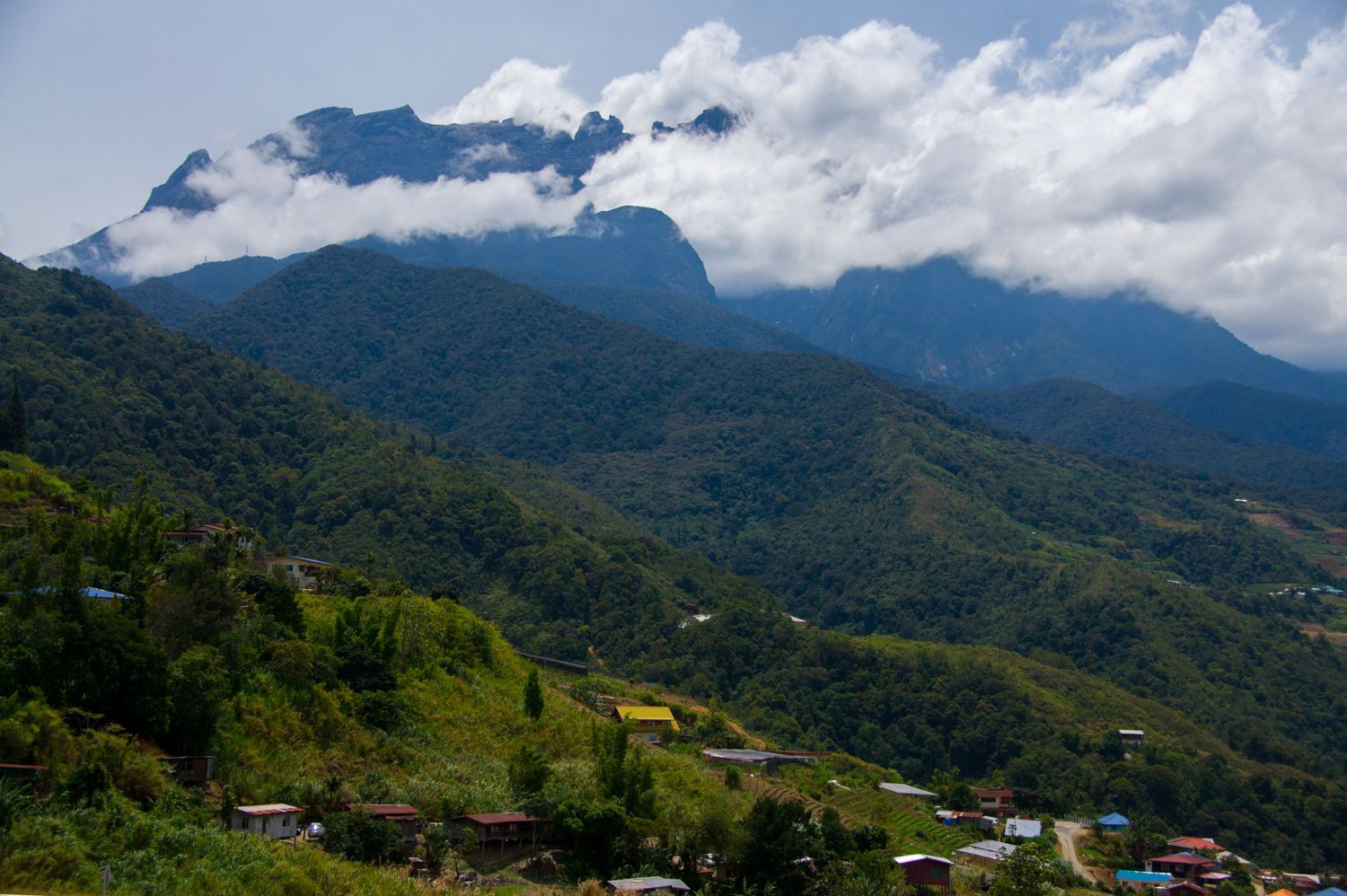 Having spent the day cycling the picturesque Tuaran Sabah and feasting on the local noodles, Chlöisu who had battled with his eyelids finally surrendered to late afternoon siesta which prolonged to an early night to bed. Meanwhile, Bike and Tours got an email from Sutera Harbour notifying us that our bookings for the next day’s steam train ride on the North Borneo Railway has been cancelled due to a leakage in the boiler and needed a few days to be repaired.

Upon receiving this news, Simon and I quickly worked on Plan B.Though we knew that Chlöisu would be rather disappointed that he can’t experience the unique luxury ride of the British colonial steam train, we were pretty confident that our “fishy” related “Plan B” would deliver equally memorable experience for him. ;-)

So the next morning, totally well rested Chlöisu met us at the local kopitiam (local coffee shop). His first “culture shock” was to see my father enjoying a bowl of Ipoh noodle soup that was topped with shrimps. His next shock was when Simon and I ordered Sabah’s famous nasi kuning (yellow rice) that was generously accompanied with sambal tuna. Back in Sarnen Switzerland, Chlöisu is used to toast, fruit juice, yogurt, oats or at heaviest potato rösti for breakfast. Something as heavy as noodles or rice or shrimps and fish is something he would normally have for lunch or dinner! Not breakfast! However, adapting really well to his new environment, Chlöisu took his first local carbohydrate + protein challenge which took shape in the form of fried noodles with fried eggs. Welcome to the food-loving country of Malaysia!

Aside from being a cycling enthusiast, Chlöisu is also a devoted model train collector. He has always been fascinated with the movements of the locomotives and keeps miniature trains at home. So when he found out that our “choo choo steam train” expedition with the North Borneo Railway was cancelled, he was clearly disappointed. However, his disappointment took a 360 degree turn when he was greeted by the friendly face of Mr Batasan (our road navigator).

Batasan a born and bred Sabahan from the Dusun Lotud tribe in Tuaran, knows his way very well. He drove a Proton Saga and it was comfortable enough to fit all four of us for a full day expedition to Kundasang, Ranau, and Kampung Luanti. Batasan’s chirpy, warm and chatty nature brought much liveliness to the group. The journey to Kundasang took about 2 and half hours from KK, it was a nice slow ride overlooking the beautiful landscape of mountains, the coast and the lush green tropical jungle. Mount Kinabalu was visible from the car screen but not too clear as it was covered by white clouds. Being a man that has been exposed to the Swiss mountains all his life, Chlöisu somehow could not believe that the height of Mount Kinabalu was about 4095m. He believed it was less than that. So before reaching Kundasang’s famous vegetable and fruit market along the highway, Bantasan stopped at Pekan Nabalu and guaranteed us the perfect view of the giant mountain. And there it was, right ahead of us stood the UNESCO World Heritage site – the breathtaking Mount Kinabalu.

There is a story behind every mountain. And there are other versions to Mount Kinabalu but I like to choose this one which I am about to share with you now. This is a love story which I heard years ago from my Sabahan friend Vivianne, which I then related the story to Chlöisu as we were standing right in front of this spectacular view. To some of the locals, this mountain is a symbol of the everlasting love and loyalty of a Bornean lady towards her husband. A long, long time ago, a Chinese Prince went on a voyage and somehow his ship sank in the middle of South China Sea. Helpless and terrified he was rescued by the locals and over time he found and fell in love and married to a local Sabahan beauty. After a few years, the Prince felt rather homesick and requested for permission from his dear wife to go back to China to visit his mummy and daddy. He promised he would return. Permission granted! However, when he was in China, the Emperor and Empress of China were not pleased with the fact that the Prince is married to a Bornean wife. “We have made arrangements for you to marry the Princess from the other kingdom” said the Emperor pointing his finger and fish pouts his lips towards the direction of the neighboring kingdom. The obedient Prince was crushed but left with no choice and out of respect for his parents, agreed and condoned to their wishes.

Meanwhile, back at the “land below the winds” his Bornean wife restlessly waited for her husband. Little did she know that he was never going to return. She would climb up to the top of the highest mountain near her kampung (village) to get a better view of the ships sailing in the South China Sea. She did this ritual everyday never losing hope that she will one day see her hubby sailing towards her kampung. On one horrible day, till death did they part; she died in the cold at the top of the mountain where she was waiting for her husband’s return. The strong wind then magically swept and turned her into a stone with her face facing towards the South China Sea and soon after the Mountain in the memory of this faithful wife was named Kinabalu (it actually stands for Cina balu) – which means Chinese widow but pronounced as “Kinabalu” by the Kadazan Dusun tribes.

As I related this story to Chlöisu and as he peered through his binoculars to have a closer look at the shape and features of the mountain, I couldn’t help but wonder how differently such scenarios would be managed in today’s modern times. One would probably insensitively write an email or text that says “Dear Wifey, Sorry this has to end right now as my parents wants me to marry another girl from the same country. Forget me and look for another. With much regret, Hubby (not anymore!!)”. Haaa how cruel!!! I continued staring at the mountain, and was about to allow my imagination soar when Chlöisu requested for all of us to take photos overlooking the gorgeous backdrop. At some point, Chlöisu nodded his head while looking at Mount Kinabalu and said “yes” now that he sees it, he believes that it is after all 4095m. Our photography session took awhile as Simon – the photographer of the day takes his time to snap the photos. There were times when we felt that our muscle jaws were aching from smiling for too long!!!

Bike and Tours’ Plan B took us next to Kundasang Market much to my father’s delight. Being an agriculturist, he happily took the lead by explaining to Chlöisu the different types of vegetables available, the tropical fruit and how or under which conditions would they grow best. All the produce are local, fresh and clean. I have personally been to numerous markets in Malaysia – wet markets and the dry ones but I must say that this long stretch of market in Kundasang is very clean and impressive. Each bunch of vegetable and fruit were wrapped neatly with the cling wraps. As we walked down the long stretch of stalls, we were greeted by the friendly “non pushy” sales ladies. Chlöisu referred to this walk as the “fruit feast walk”. This is where he challenged his taste palates to the different tropical fruit such as rambutan, mangosteen, mangoes, ciku, dragon fruit and pineapples to name a few. He claimed that the pineapples he tasted here are the sweetest pineapples in the world! “Tip top” was his exact words to describe the pineapples.

Our journey then took us to Ranau, Simon and I are pretty familiar with this direction as we cycled this route earlier this year from Kundasang to Hot Poring Springs. This time around we went straight to Sabah Tea Plantations. The journey going up the plantation was rather rocky on the loose gravel road but Bantasan was skillful enough to maneuver his way to the coordinates of the only organic tea farm in Borneo. We were there at around 2pm and all of us were naturally hungry, so we headed straight to the restaurant which offered us a splendid backdrop view of the tea plantation that spread as far as the eye could see. Mount Kinabalu appeared at the end of the plantation to complete this picturesque sight. The food was delicious and the restaurant’s chef was resourceful at creating their local dishes with tea leaves. We had chicken soup with tea leaves, fried prawn with tea leaves, fish head curry and of course Sabah vegetable (this is almost Sabah’s version of asparagus). We were aware that we had past the time for the factory visit, so we took our time enjoying our scrumptious lunch and later adjourn to a nice refreshing cup of Sabah Tea.

Just nearby to Sabah Tea Plantation is a village named Luanti. This village is famous for its fish massage. But this is not the normal fish massage that you find in some of the malls in Kuala Lumpur. No no no!!! Here, size does matter. This is not the small tiny fishes trapped in the manmade chlorine infused tub. The fish spa at Kampung Luanti takes pedicure at another level! "Ala-natural" style. Here the fishes are huge and they are not confined by the limited tub space like in the malls. Here, they are free to swim wherever along the Tagal River. With just a small fee of RM5 (for locals) and RM10 (for foreigners) your feet will be pampered and presented to the huge fishes for some TLC for about 15 minutes. The whole scenario was very bizarre for Chlöisu but he was very keen to try it out. So when our numbers were called, Chlöisu was the first to walk his way towards the river. Simon was quick to grab a chair for Chlöisu to sit on while enjoying his therapeutic session. Automatically a school of “pelian” fish swam their way towards Chlöisu’s “well seasoned” feet. At first he seemed a bit petrified to offer his feet to the pouty sexy lips. However, when he braved himself, the serene atmosphere at the Tagal River was broken by the sound of Chlöisu’s giggles. The sexy pouty lips smooched on the thick dead skin cells on his heels and toes area leaving Chlöisu with smooth skin, so smooth that he could glide on the floor after this massage therapy! As we were having fun frolicking with the fishes, our number was called. Our 15 minutes session with “pouty sexy lips” has ended. We walked slowly on the pebbles in the river to head back. All accept for Chlöisu, he enjoyed it so much that he requested for another half an hour extension!!!

We ended the day back in KK with a visit to the Filipino Market and seafood dinner that consists of among others, a huge crispy fried fish with soya sauce! Bike and Tours “Plan B” "Plan Borneo" for Chlöisu may not include the colonial locomotive ride but it was definitely an experience that brought all his five senses at work (the Borneo style). Next adventure will be on the Kinabatangan River to Sukau. Looking forward to this.

Episode 2: Chlöisu and Plan B: