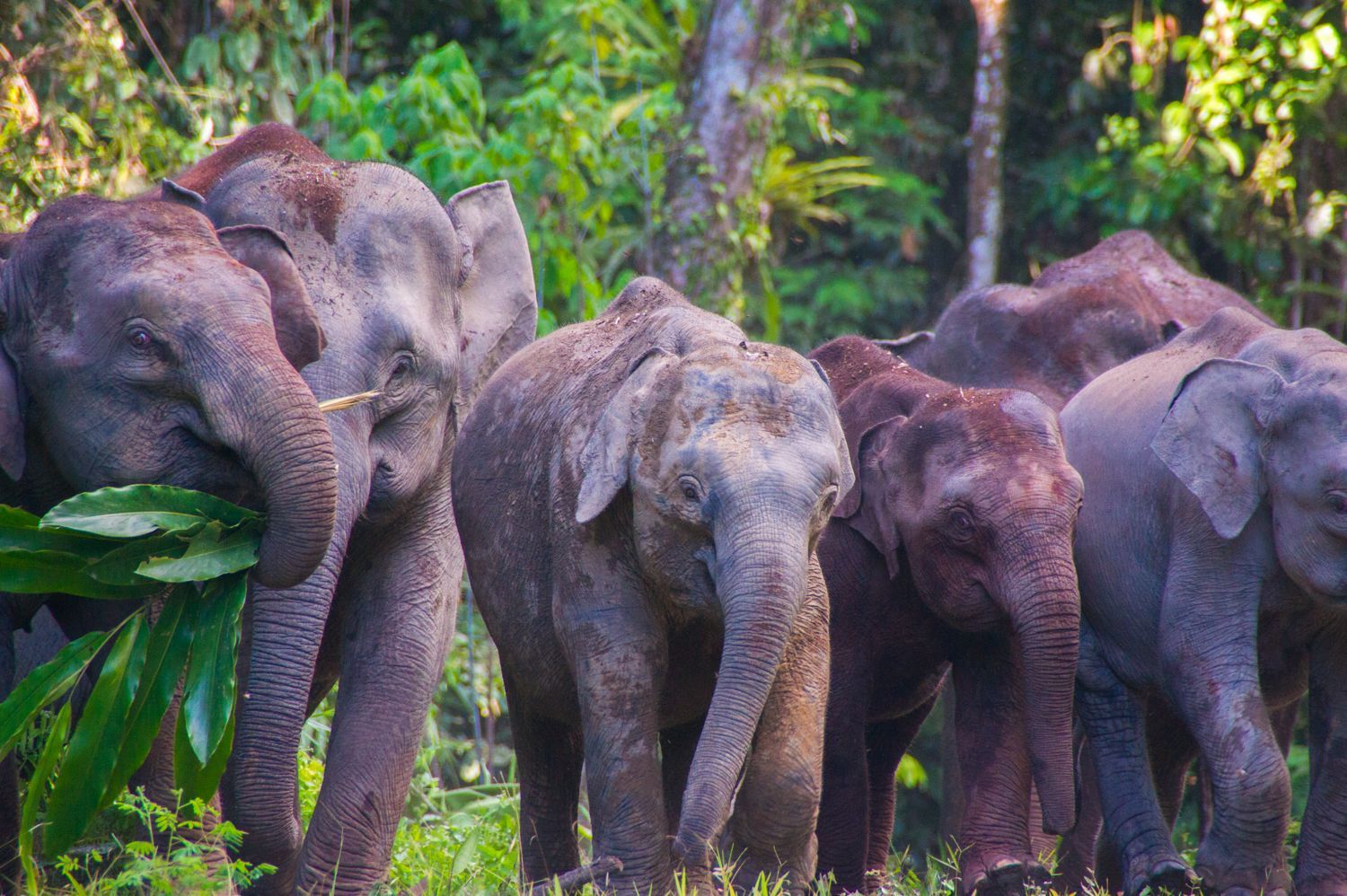 Danum Valley and the Pygmy Elephants

I have not been inspired to write for a while now. But nature and inspiring world travelers kicked me in the ass and got me typing my experience once again!

Since February this year we have been blessed with inspiring travelers who were in Borneo for their honeymoon and some who have listed Borneo on their bucket travel list. Having met the lovely strangers we now call friends, has made both Simon and I realize that the huge step we took almost a year ago is all worthwhile. It is not just a business venture or as some would think of it as “a hobby”? No, definitely not. It is definitely bigger than that for a humble set up like Bike and Tours.

Let’s see, February started with a bang with sporty honeymooners from Perth – Mick and Erin who has travelled and worked in the different continents of the world. Keen naturalists both of them impressed us with their consumption of chili. Then we had a lovely Swiss couple Viola and Pascal who walked 2000km+ from Switzerland to Santiago de Compostela in Spain! And just a few days back we had the ever positive couple from Germany – Elisa and Martin who cycled with us in Taliwas and Danum Valley. We thank all the above individuals for appreciating our work and for providing us with constructive feedback in this tropical adventure of ours.

As I am typing this, the image of our tour last week with Martin and Elisa keeps playing in my mind. Everything seems so surreal! Martin and Elisa did their 20+km cycle from the Silam junction to Taliwas. I must say they took the challenge extremely well considering the hot and humid weather. It was all good with the sweet reward of the clear Taliwas River after the ride. Slightly after lunch, we loaded the car with the bicycles and drove to Danum Valley. On the way down the gravel road, Elisa who was still charged with enthusiasm jokingly made comments such as “soon we shall encounter the elephants” or “when will we be stopped by the elephants?” Martin on the other hand was happy to discover the dense tropical rainforest and glad that we kept to our promise of not showing him the palm oil plantation! We stopped for a while to snap photos of the lovely green valley, the weather was still scorching hot but there is something about the air in the rainforest, cool breeze kept blowing our way. It was actually very pleasant.

As they were taking pictures, Simon and I who gave Elisa and Martin some privacy while we began to ponder to Elisa’s questions on seeing the elephants. We asked each other when would we be lucky enough to see a wild elephant? Let’s not be greedy, one elephant would be enough. We have been to Danum Valley numerous times over the past one year. But so far, we have only been lucky to witness the sight of the elephant dunks! We could only guess if they were around by the moisture level of the dunk! How sad!!!

As we continued our journey down the ex-logging road, I craved for a cup coffee. Just as I was about to ask if anyone wanted a coffee which we had conveniently prepared before leaving Taliwas, Simon pointed ahead, his eyes grew huge with excitement “Look!!! Look!!! Look!!!!” he exclaimed. As we all looked ahead, we were all in for a jumbo surprise!!!! Two pygmy elephants – a mummy and her baby!!! They had their booties facing us whilst their long tail swayed and curled. Their huge ears slowly fanning themselves. We drove closer but respected their distance; we did not know what to expect – if they were in a good mood or in a bad mood? As the mother elephant heard the engine of our vehicle, she seemed to signal to her kid to dive straight back to the jungle. We remained in the car for a while and proceeded to the side of the road where the elephants were last seen. We could see something moving in the midst of layered tropical forest. There was in fact a lot happening in there. Almost like a jungle party. We saw movements of the leaves and the shaking of the trees; we heard snapping of branches being stepped upon, we heard splashing of water. There must be a river in there for us to hear the splashing sounds. The pygmy Jumbo and relatives must be frolicking in the river. At times we heard them blowing their trumpet letting out a sound very similar to the Chewbacca character from Star Wars.

There was a trail of powerful body ordour that the pygmies left behind which challenged our sense of smell. In addition to that, they also left behind a group of fly look-a-like insects which lingered around us. We had our fair share of battling these small insects while snooping on the pygmies in the valley! No wonder the elephants were constantly swaying their long tail and swatting their ears! We waited a bit longer for the pygmies to come out again, but I guess there was more action in the valley that the ex-logging road was not as happening for them to show their unique presence.

We proceeded back to our car and drove on towards Danum Valley Field Center. Like excited old kids, we spoke about this lucky encounter with the pygmy elephants. Reliable sources claimed that the Borneo pygmy elephants are said to be much smaller in size compared to the elephants in Africa. In fact the Borneo Pygmy elephants are considered to be the smallest in Asia. Though we only got a chance to see two elephants from a back view, it was enough to give us the happy vibes. But wait, little did we know that there was more to come.

Elisa who was still engaged in our conversation, put her head out of the car window. From the side mirror, I could see her scanning the depth of the jungle. It was not long till this petite framed girl shouted “There they are!!” she said pointing ahead. And indeed, there they were. The pygmies about 15 of them, in the middle of the road! We now get the front view of the elephants. Their faces innocent and cute, like Yoda from Starwars with a trunk. Their trunks curling to give support to the greens they selected to munch on as their healthy snack. They seemed calm. We are sure they were aware of our presence as our car engine was rather loud. But I guess since we kept our distance, we sort of earned their respect? They continued munching. There were a few little ones who seemed to be playful with the adult elephants. Even from the distance we could see the mud-like patches on their thick grey skin, their huge eyes batting, their jumbo ears slowly fanning away the insects.

Some roaming the streets, some munching on the greens at the side of the road.

When love meets outdoor adventure and nature! Next