Sabah the Land Below the Wind is a place full of surprises. Get ready to be amazed throughout your journey on the island of Borneo, the third largest island on Southeast Asia which is known for its exceptional biodiversity. Not only is it home to some of the world’s rare and weird animals, beautiful islands, historical cities, highest mountain and world oldest rainforest. It is a destination where you are welcome with the warmth of multi cultural indigenous tribes and wide array of delicious authentic Bornean cuisines, that makes your holiday unforgettable. 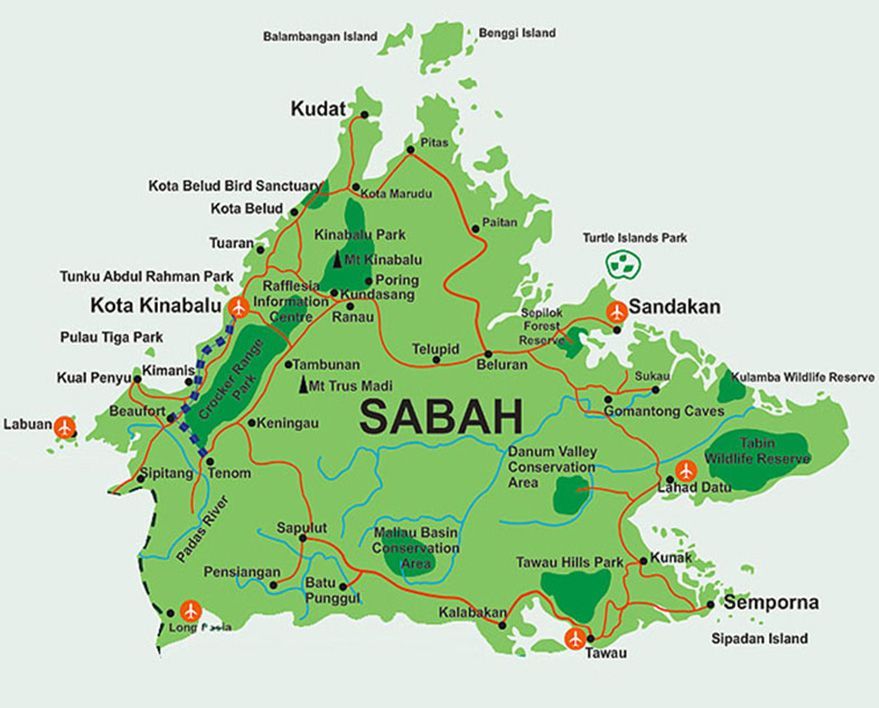 Borneo is divided among 3 different countries, which is the East of Malaysia consisted of Sabah and Sarawak, Brunei in the north while Indonesia the Kalimantan region in the south. Located at the Northeast corner of the Borneo, Sabah was known in ancient times as the Land Below the Wind because it lies below the typhoon belt. The climate is generally hot and sunny all year round, and unpredictable rains once in a while. Therefore, travellers are advised to wear comfortable and suitable clothes for the tropical climate. The average temperature for the lowlands region such as Kota Kinabalu, Sandakan, Tawau, Lahad Datu and Kudat are about 32 degrees, while the highlands region like Kundasang, Ranau, Tambunan are around 21 degrees. But bare in mind, for those climbing the Mount Kinabalu the climate temperatures can drop to freezing level once you reach 3500 metres and above.

Meanwhile, Sabah’s terrain is rugged with the mighty Mount Kinabalu at 4095 metres and it is the highest peak in Malaysia, dominating the surrounding landscapes. The UNESCO World’s Heritage site is famous for its wide diversity of flora and fauna, as well as one of the world’s largest undisturbed rainforest. “It is considered that the present distribution of forest owes much to the effects of geological history and some correlation exist between types of formation. The oldest rocks in Sabah are those of the crystalline basement formation, high land to the west of Lahad Datu, probably of Jurassic or earlier origin {Geological Survey 1967}. At the start of the Tertiary, the north of Borneo probably resembled an archipelago {Keith 1935}. Igneous intrusions and sedimentation gradually united the islands. The general result of historical processes gave harder, older sedimentary rocks to the north and west, with younger formation the east.” ~ Sabah.gov.my

From aerial view, Sabah is covered with lush green trees. However, one third of the Sabah forest is an oil palm plantation. It is the main economic backbone of Sabah that provides employment and substantial earning to the people. Nowadays, most of the oil palm plantations are Certified Sustainable Palm Oil {CSPO}, a guidelines that halt the expansion of oil palm plantation to ensure Malaysia’s forest cover remain above 50 percent. In fact, most of the former plantation area has been rehabilitated and conserved as the secondary forest for the wildlife, for example the Taliwas Forestry and Recreation Area, Kawag Danum Rainforest and Deramakot Forest Reserve. And according to WWF, Sabah remains Malaysia’s stronghold of the Bornean Orang Utan with more than 70 percent of the population still can be found in the protected forest. Bukit Piton in Lahad Datu is one of the best area to spot these endangered species. Staying overnight here not only guarantee the sight of this fluffy creatures, but visitors can also contribute to tree planting which is the food source for the orang utans and other wildlife.

Besides flora and fauna, Sabah is also the most diversified state in Malaysia. Sabah is home to 32 different indigenous ethnic groups that make up the 3 million of the population. Some of the indigenous community are including the Kadazan, Murut, Bajau, Kedayan, Sulu, Minokok, Bisaya, Rumanau and Rungus. Each of them have different traditions, some of which are still practise today. Apart from the local ethnic language, Bahasa Malaysia {national language} and English is widely spoken, as well as Mandarin and other Chinese dialects. Various festivals are also celebrated throughout the year, for example Kadazan Harvest Festival, Bajau Water Festival, Eid Mubarak and Chinese New Year. So, make sure to mark your calendars if you would like to experience the exciting events.

Numerous of daily direct flights are available from Kuala Lumpur to the amazing attractions in the east and west of Sabah. From these 4 main town, you are able to explore the surrounding attraction :

From Kota Kinabalu city you can visit :

Gaya Island : Only 20 minutes from the city for an island getaway

Maliau Basin : Known as the Lost World of Sabah

From Lahad Datu, you can explore :

Lahad Datu Tour : Rent a bike and explore the rustic town at your own pace

Darvel Bay Diving : Away from the crowds, take a plunge and witness the beauty of underwater world

Mount Silam : Breathe in the fresh air of the forest as you cycle through the rainforest

Bukit Piton : Get up close with wild orang utan on a day trip

Taliwas Forest and Recreation Area : Explore the rainforest on two wheels and enjoy delicious lunch at the waterfall

Kawag Danum Rainforest : An alternative for wildlife and rainforest adventure in Danum region

From Sandakan, you can go to these places :

Sandakan Tour : Explore the heritage buildings and monument of Sandakan which was built during the World War II

Sepilok Orang Utan Rehabilitation Centre : Take a picture with baby orang utan in the nursery and share it with your friends

Selingan Turtle Island : Witness turtle lay their eggs and take this opportunity to release the hatchlings to the sea

From Tawau, you get to discover the nearby attractions :

Pom Pom Island : Get yourself certified and explore the world best dive sites

Mataking Island : Exotic island to create and capture wonderful moments and its only an hour to Sipadan island