What is Brothers Cycling?

Brothers Cycling for the World is a foundation that is created from the cycling journey of the Werren brothers in Oct 2010. It was the brothers’ in tentions to transfer their cycling passion to the benefit of others. Through the donation that they received from their sup- porters, they contribute the funds towards human- itarian and conservation projects.

When Brothers Cycling first heard from Bike and Tours that there were orangutans in Bukit Piton in Lahad Datu, it made them curious to find out more about this location. Even the locals have not heard of it! Bukit Piton is claimed to be the location where one could set out on an adventure in search for this almost extinct species – the Bornean Orangutan.

Bukit Piton is situated at the Ulu Segama- Malua forest, which was once destroyed by fire and poor logging practices. However, through efforts by WWF – Malaysia, Yayasan Sabah, Sime Darby, Sabah Forestry Department and the team spearheaded by Dr Teo from Tabin Lodge, this once degraded forest is being restored and nurtured with love – hence welcoming the orangutans and other wildlife back to their home bound.

In late 2016, Bike and Tours decided to check out Bukit Piton on a recce tour. True enough after an hour drive from Lahad Datu to Bukit Piton, just within minutes we encountered our very first Orangutan. It was an amazing experience to see the orangutan in the wild. This beautiful creature noticed our presence and continued eating before gracefully swinging its way back in the depth of the jungle. We were lucky that over the next few hours to encounter another 2 orangutan in the wild. And that to us was the ultimate! Other visitors have seen more orang utans than us but of course when you are in the wild, lady luck plays a role. The wild is in the wild and not a zoo where it is a guaranteed that you get to see the animals in its cage.

As we ventured further in into this Class 1 Forest Reserve, we learnt that despite forest restoration and conservation efforts that has taken place at Bukit Piton, the jungle is still falling short on food sources for the orangutan and other wildlife. It is sad to see that some of the replanting efforts by big organizations and NGOs were not successful as emphasis were placed only on planting in a large plot of land without considerations for maintenance. To put it simply in layman’s term, replanting efforts does not stop when a seedling is planted in the ground. This newly planted seedling needs the tender loving care from human to encourage and support its growth. The seedlings are rather fragile and can’t be left on its own to regenerate itself. Maintenance work is very important and is an ongoing process. This is to ensure that the newly planted seedling is getting enough sunshine, nutrients & water. One also needs to monitor that creepers and parasites do not hinder its growth. After a few rounds of maintenance and when the trees are standing tall and strong without being covered with creepers, only then can it be left to further grow on its own.

Brothers Cycling together with Bike and Tours in Borneo met up with Dr Teoh from Kontraktor Malaysia in late 2016. Dr Teoh who is also the founder of Tabin Lodge has been working at the Bukit Piton area for about 20 years now. We were given a tour around the area and we saw that some parts of the replanted jungle were growing well and was able to draw the wildlife back to its natural habitat.

However we also saw that some patches of land were left with small trees that were heavily covered with creepers. We were told that some of the replanting projects were huge, donations were given to replant in this area. But, the focus was more on planting based on quantity of the seedlings without giving thoughts on the cost of maintenance. As a result the tree planting initiatives fell apart when the fragile seedlings lost its battle to source for light and space to the creepers and parasites.

We also learnt that Bukit Piton area was under strong pressure from the surrounding plantations owners. As they were aware of the poor condition of the jungle they were quick to demand for this plot of land to be turned to palm oil plantation. Fortunately, at this stage the strong voices of those involved against the idea were heard. Conservation action continued for this forest to provide shelter and food source for the wildlife and local community.

We were in favor of Bukit Piton for its conservations efforts and with that together with Bike and Tours, Kontraktor Malaysia and Tabin Lodge we saw the opportunity for eco tourism to take place. All visitors to Bukit Piton were given the opportunity to do their part to plant a tree. This is not just any tree but a tree that is going to be food source for the wildlife in years to come. The response has been positive for us to implement sustainable tourism in this region.

In addition to that, based on past experience of replanting projects that did not meet its success, we decided to start our replanting project small but commit to longer period of time on maintenance. Our project in relation to 11,612HA is fairly small. Nevertheless, as a start we decided to commit to half a hectare for the next five years. We hope that our intentions for the replanting efforts and tours to Bukit Piton will serve as a means to give back to the local community and conservation. Dr Teoh submitted our proposal to the Forestry Department and we were very happy to learn that they have taken us seriously and have given us the trust to implement this replanting project in June 2017.

So is Bukit Piton the lost soulless jungle?

The declaration of Bukit Piton into Class 1 Forest Reserve is certainly an important step in the right direction. The Class 1 Forest Reserve’s main function is to safeguard water supplies, soil fertility and environmental quality (Sabah Wildlife Department, 2017). The habitat for various wildlife such as the endangered orangutan and storm stork for example makes Bukit Piton very valuable and worthy of protection in any case. There is still a lot to be done in terms of upgrading this conservation area. We strongly believe that we could achieve something with our small contribution. We however, do have the intentions to further contribute to the growth and wellbeing of this jungle. Our dream is to be able to sign up for at least one hectare every year. In which case we need your support. Planting a tree with 5 years maintenance until it can grow on its own would need about US$60 per tree. An annual membership is required so more trees can be planted each year. A minimum aim of 160 members is required so that we can automatically reach the goal of 1 hectare per year.

We truly hope that we could gain your support to bring life and soul to Bukit Piton once again.

A project supported by Brothers Cycling

The total surface area of Sabah is about 7.4 million ha and about 50% of this area is still classified as forest area. Sabah forest has one of the most diverse flora and fauna in the world. In the past, irresponsible logging practices and illegal encroachment activities has contributed to a badly damaged Sabah forest. About more than half of Sabah forest area is in dire need to be replanted with indigenous tree species and restored to its’ original stage. One of the most important reasons to restore a degraded forest in Sabah is due to the important fact that it still the canopy for lots of wildlife, birds and particularly the endangered species of orangutan and elephants.

Reality is, a degraded forest is not able to recover on its own. The Sabah forest needs our help to restore and preserve the diverse flora and fauna for future generation.

We can restore Sabah degraded forest by engaging in realistic tree planting activities. Over the last 20 years, Sabah Forestry Department (SFD) have been promoting tree planting and silvicuture projects to restore degraded forest in Sabah. SFD has stop issuing small timber harvesting license that has caused tremendous damage to forest. SFD now favors large scale, long term, sustainable and good forest management practices. About 2 million ha of Sabah forest is now under such forest management called Forest Management Unit (FMU). The FMU is strictly monitored by SFD and they are responsibible to protect the forest and manage its sustainability. This policy have improved forest status as FMU are responsible at ensuring timber harvesting activities are done sustainably and degraded forest areas are restored.

One of the most important SFD policy is to covert 30% of Sabah’s forest area into forest conservation area (Class One- Protection Forest Reserve (PFR)). The conversion to PFR area is especially important for forest area that is habitat for wildlife such as the orangutans and elephants. A lot of PFR areas consists of degraded forest due to past illegal harvesting and encroachment. The recent trend of PFR converted area are the areas which was once badly logged. Most of the PFR needs either silviculture or planting treatments to restore the forest to once its original structure. 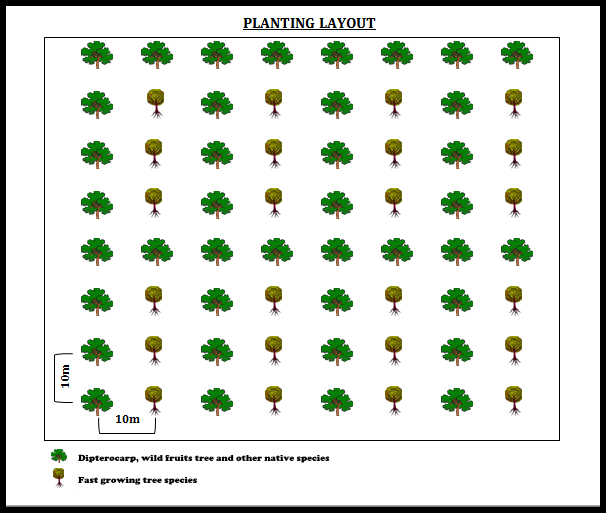 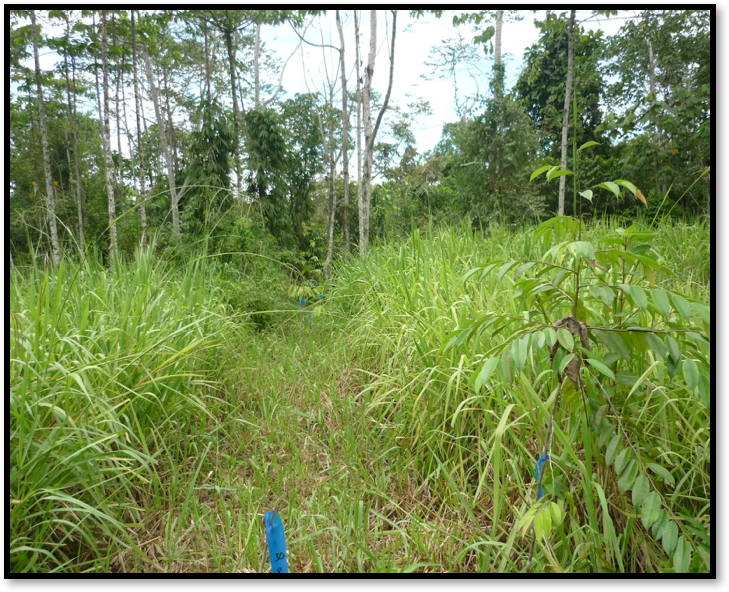 3. Planting of seedling. Only indigenous tree species of Borneo will be selected for planting. Seedling selected from nursery must be harden and strong before they are planted. 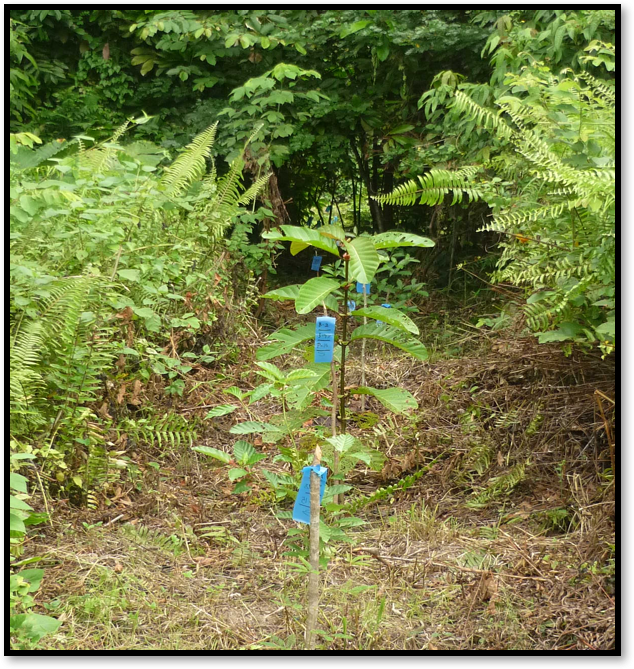 4. Maintenance of planted seedling. The first maintenance at 2 months after planting must be conducted. Following which, every 3 months for 20 rounds (5 years). During maintenence all vegetative weed that is affecting the planted seedling is to be removed around planted seedlings. Apply 50 g per plant of NPK fertilizer and replant all of the dead seedlings. 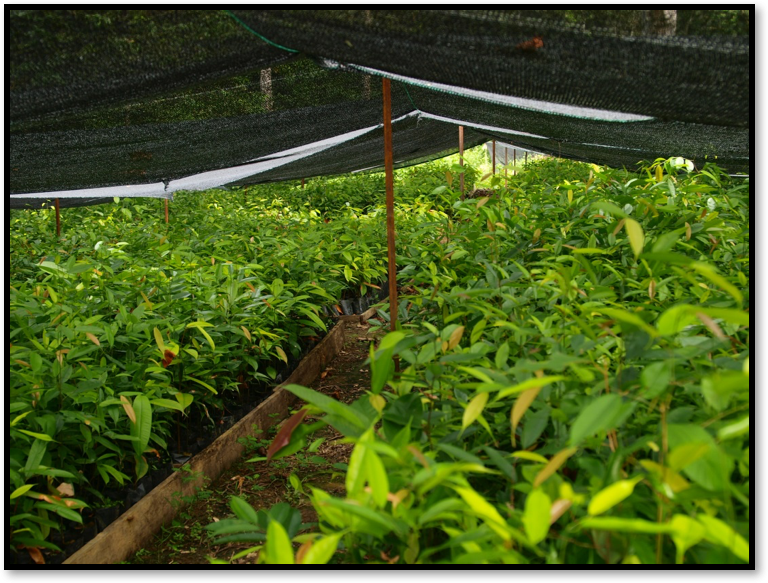 Kontraktor Malaysia is the contractor in charge for planting and maintainance of the seedlings. Kontraktor Malaysia has been working very closely with SFD throughout the years and have been involved in a lot of forest restoration works in Sabah. They offer their service to any person, company and/or association that is willing to commit to forest restoration be it big or small. They are the subject matter experts in the forest and knows the location of the degraded forest and unfinished forest restoration. It is with knowledge that they recommend those who are interested at reviving the jungle on which areas to plant new tress/continue maintainance. It is with hope that with any donation or contribution whether it is big or small are the vital key success forest restoration in Sabah.